On April 14, 2019, I played role-playing game called The Sword, the Crown and the Unspeakable Power, abbreviated SCUP. The session entitled “Abandoned” appealed to me so much that I decided to describe it here, although so far I only published reports from sessions when I was a Game Master, not a player. 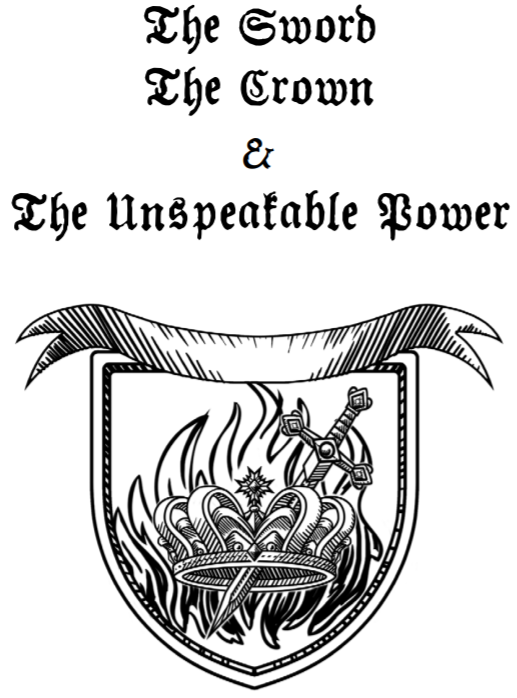 Interestingly, a significant part of the materials needed for the game, including descriptions of all character classes, is available for free on the authors’ website.

SCUP, like other PBtA (Powered by the Apocalypse) games, does not contain a pre-made setting. In accordance with the rulebook, players should create a setting (with particular emphasis on its mythology) together, before the game begins. However, because “Abandoned” was supposed to be a one-shot and the preparations could not last too long, the GM determined the main framework of the world, leaving the players free to specify details. Quoting the sneak peak of the session: “Imagine a world that the Creator abandoned in the middle of creation or annihilation. Just a piece hanging between nothingness. The bay on what was left of the sea, breaking into what was supposed to be a land. And in this bay a colorful city full of life, death and brutal politics, ruled by the His Highness – the most powerful being who has lived and ruled for hundreds of years“.

It’s a convenient solution, removing the need to create entire continents and many countries. The abandoned part of the world is surrounded by a magical Border. Those who pass through it never return, while dangerous demons come from the other side from time to time.

Studying and combating these demons is one of the tasks of the Four Arms, an order subject to the His Highness, which we created at the beginning of the meeting, and to which our characters belong. The Order consists of four branches (Arms) responsible for: religion, magic, science and armed forces. SCUP assumes that each of the Player Characters belongs to a separate faction, which favors rivalry between characters. We, however, preferred to cooperate, which is why we created a common faction. And here are our characters:

Scene I: the demon

Three heroes, escorted by three recruits from the military branch of the Order, walked down the street in an abandoned, ruined part of the city. The Lighthouse Keepers, who guard the Border, informed them about a demon in the area. And indeed, a narrow, dark crack in reality suddenly appeared in front of the heroes, heading in their direction. Grendel tried to attack it with his magic spear, but the mysterious force threw him away. Three recruits attacked the demon who swallowed them. It was not until the luminous beam conjured up by Mattius to snatch one of the victims from the void and destroy it.

The heroes heard footsteps from both the front and the back. Two men from the House of Diamond, one of the five most powerful noble families, appeared in front of the heroes. In the back, an armed unit appeared, led by Pen Frost of the House of Ruby, who had a grudge against Grendel (and his family has long competed with the Order). Frost accused the heroes that they destroyed the demon before he had the opportunity to examine it. A nobleman from the House of Diamond expressed his appreciation for the fighting skills of the heroes. Mattius guessed, however, that in fact the man deeply hid his annoyance about not being able to get to this place in time. Grendel intimidated Frost to let the heroes leave the area, along with a rescued recruit still in a state of deep shock.

As for game mechanics, the above scene looked roughly like this:

Scene II: after the clash

At the headquarters of the Order, the heroes managed to extract the rescued recruit from the state of numbness. Mattius examined him with magic, thanks to which he learned what the man saw when the demon swallowed him. It turned out that there was a small space inside, which suggested to the heroes that the demon was actually a self-propelled teleportation portal. The heroes wondered what the Diamonds really wanted to do with the demon.

After some time, they were visited by the Obligator – one of the servants of the His Highness, serving as a notary, judge and jury combined. He informed the protagonists that Pen Frost had filed a complaint against them and listened to their version of events.

This scene was mainly narrative, if I remember correctly, the only roll was my “Whisper into the Unspeakable Power”, thanks to which we learned what was inside the demon.

A few days later, each of the characters was busy with their own affairs. Silence meditated in the room containing a vessel in which the souls of good people are gathered, thanks to which one day Her Highness is to be summoned. Mattius dealt with his research. Grendel went out to the city, seeking opportunities to provoke Pen Frost to attack. Instead, he met another member of the House of Ruby, Starfall, who confided her interest to Mattius and asked the warrior to arrange a meeting or a letter.

Meanwhile, Silence heard the voice (of Her Highness?), who told her to go outside the building. In a trance, she was carrying out orders when she unexpectedly was assaulted by someone. Torn from her trance, she realized that she had left behind the open door to the sanctuary…

Mattius’s research was interrupted by a loud explosion. When the mage came to the window, he saw that the Order’s headquarters were being attacked by masked thugs. The use of magic hurricane allowed Mattius to capture one of them, the rest fled.

Silence tried unsuccessfully to set herself free. In the end, the attackers let her go, but the priceless vessel was broken, and the souls that had been collected for over a hundred years disappeared. It crushed the priestess.

Grendel returned to the Order’s quarters when the attack was over. His extraordinary fighting abilities were not used this time…

After speaking with the Obligator, only the Grendel’s player had an idea for further action (provoking Pen Frost). Waiting “what will happen” turned out to be quite risky …

Starfall is Non-Player Character whom we created before the game. Each player can assign two out of three opinions about his Character to the other Players’ Characters. I suggested that a third opinion, “You want to be me, maybe more than you realize” should be attributed to someone from the rival faction (House of the Ruby), which would allow various interesting plot twists.

Silence’s Player failed a roll for escape, while I was lucky, thanks to which Mattius managed to overpower one of the attackers without suffering any harm. Apparently, his motto is:

Grendel and Mattius took the captured attacker to the dungeon. The prisoner turned out to be resistant, and the heroes were untrained in the art of interrogation (ie. torture), so before he died, they only managed to squeeze from him that he belonged to the Long Knives gang. Mattius desperately used magic to “question” the dying man’s soul. He saw the vision of the woman who had ordered the attack – but so vague that he would have to see her live to be able to identify her.

When Silence recovered, she and Grendel tried to persuade the Order’s superiors to give them support. However, they were refused and blamed for allowing to lose the vessels with souls.

Therefore, the heroes set about planning revenge on their own. Silence and Mattius began to magically analyze the visions that had misled the priestess. They found that the souls were absorbed by a woman who… could potentially become Her Highness!

Meanwhile Grendel decided to obtain an information about the location of the Long Knives’ hideout… by beating and threatening random thugs in the slums. Amazingly, this not-so-sophisticated method has proved effective. But it was necessary to act quickly before the Long Knives could find out that their hideout was compromised.

When interrogating the prisoner, I missed the roll for the first time during this session. I was able to partially compensate for its effects by rolling for “Whisper into the Unspeakable Power” and obtaining – a vague but nevertheless – vision of the woman who ordered the attack.

Silence’s Player for “Call on your Faction”, and the Grendel’s Player helped her. Despite the use of Honor Points (increasing the chances of success in this type of rolls), both of them failed, as a result of which they did not receive support, and in addition, the Game Master chose the option “Status is threatened”, reflecting the reproaches of superiors.

Then, however, both our “Whisper into the Unspeakable Power” and “Threaten with Force” rolls were successful, thanks to which we obtained key information.

The heroes along with a small group of armed men went towards a warehouse at the docks – the hideout of the Long Knives. The hastily arranged attack plan was as follows:

Unfortunately, the ruse with the cart was not as effective as the heroes expected. Someone inside the warehouse apparently wielded magic – a powerful wave washed off the crossbowmen from the pier. Silence and Mattius had to face numerous opponents, armed with crossbows and long knives (unsurprisingly). Both of them suffered serious wounds, but Grendel, who matched a small army in terms of combat effectiveness, saved the situation – part of the Long Knives fell in battle, the rest fled by boat, and the heroes managed to take prisoners and retreat to the Order’s headquarters.

As you can guess when reading the description of the battle, this time the dice were very capricious. Mattius got 3 wounds (5 wounds mean death!), Silence also lost consciousness at some point (result of 10+ on “Taking Harm” roll). The situation was saved by Grendel’s special ability “Send an army, for I will not relent”.

In summary, the five-hour session turned out to be very dynamic and exciting. In my opinion, SCUP allows to create colorful characters, each of whom has unique (and valuable) abilities. The Game Master proved to be very flexible, adapting to the decisions made by the players and the results of the rolls. We are all eager to continue the game, so I hope that this report will soon be continued…

My other posts about RPG:

I love travelling, history, literature and RPGs. I have a blog about my travels: https://castelviator.wordpress.com/ View all posts by Castelviator