In 2019, I read 60 books, mainly e-books. It’s time to tell about them, this time in a different form than in the case of the literary summary of 2018. This time I want to write more about each book I read, so separate posts for each month of the last year will work better.

In the case of scientific and popular science books, I present basic information about the education and achievements of the authors, to help you verify their competence to express themselves on a given topic, in line with my approach expressed in the text “To trust in science“. I do not do it in the case of fiction – I believe that in this case the only requirement is literary talent, which does not result (directly) from education.

„Tiberius. Empire on the precipe” is a novel describing the rule of Tiberius, the second emperor of Rome. For most citizens, it was a peaceful period (especially compared to the civil wars of previous decades), but in the quiet of the marble palaces there was a fierce struggle for power. The ambitions and mutual resentment of members of the ruling family led to a series of tragedies that shook Roman elites.

This video presents some of the key events depicted in the book.

Associations with such works as “House of Cards”, “A Song of Ice and Fire” or above all “I, Claudius“ (Claudius and his grandmother Livia play a significant role in this story) are fully justified.

In addition to the dramatic action, “Tiberius” also contains a lot of interesting facts about the architecture, living conditions and customs of the ancient Romans (not only those of the elites), which in my opinion is an additional advantage of this book.

How to be miserable: 40 Strategies You Already Use. Randy J. Paterson PhD 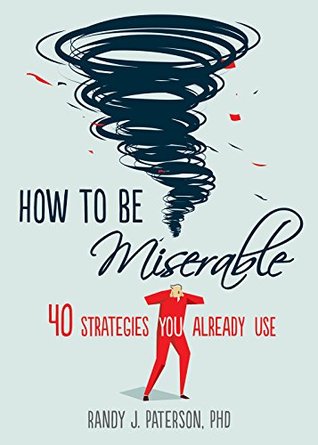 Randy Paterson is a psychologist, who achieved a master’s degree and then a PhD from the University of Western Ontario. He is the founder of the Changeways clinic in Vancouver and the author of several books. He also has a YouTube channel.

Paterson assumes that it is very difficult to give an universal answer to the question “how to be happy?”. It is much easier to indicate attitudes, thinking patterns and habits that make people unhappy and which are worth avoiding. Hence the idea for an anti-guidebook. The book has not yet been translated into Polish, which I regret, considering that Poland ranks 37th (out of 183 in the world) in terms of the percentage of suicides (and 21st in the case of men).

I learned about the main theses of this book thanks to the video 7 Ways to Maximize Misery:

Here you can read the fragments of the book that particularly caught my attention. 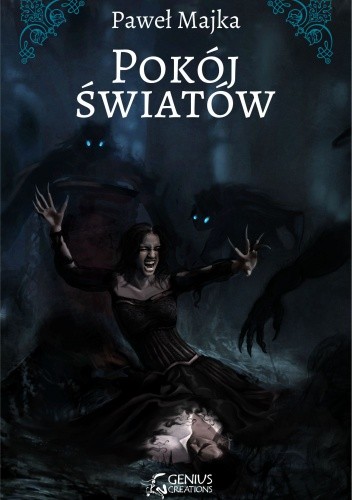 “The Peace of the Worlds” (the title is the reference to the classic book by H.G. Wells) is the first novel set in the Mythworld – a fantastic, alternative reality. During the First World War the Earth was invaded by the Martians, whose mythbombs released the energy of faith, which in turn led to the revival of characters from mythology, fairy tales and legends.

I do not know another book whose Dramatis Personae include Princess Wanda, a Martian businessman, the characters of Sienkiewicz’s “With Fire and Sword” and ghastly Bolshevik commissars.

I really like this crazy idea for the setting – I’d love to play the role-playing game set in it!

Aside from the amazing universe, this book also has an engaging story of revenge, with twisted intrigues in the background.

In 2015, the novel won the Jerzy Żuławski Literary Award for Grand Prix.

Civilization. The West and the Rest. Niall Ferguson 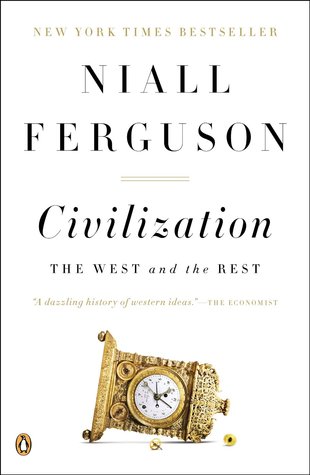 Niall Ferguson is a professor of history at Oxford University and Harvard University. In the book he describes how the Western civilization has dominated the world despite being inconspicuous at the dawn of the modern era compared to the Chinese or Ottoman empires. Although the position of Western civilization is already weakening, the fact of its dominance in the last few centuries is indisputable and it is worth knowing what it resulted from.

I learned about the main theses of this book thanks to the author’s speech on TED Talks: The 6 killer apps of prosperity. I am grateful to the English teacher who played this video for us in class.

Ferguson cites specific facts to support his theses, as in this exemplary passage:

Those who decry ‘Eurocentrism’ as if it were some distasteful prejudice have a problem: the Scientific Revolution was, by any scientific measure, wholly Eurocentric. An astonishingly high proportion of the key figures – around 80 per cent – originated in a hexagon bounded by Glasgow, Copenhagen, Kraków, Naples, Marseille and Plymouth, and nearly all the rest were born within a hundred miles of that area.

In marked contrast, Ottoman scientific progress was non-existent in this same period. The best explanation for this divergence was the unlimited sovereignty of religion in the Muslim world. Towards the end of the eleventh century, influential Islamic clerics began to argue that the study of Greek philosophy was incompatible with the teachings of the Koran. (…) In 1515 a decree of Sultan Selim I had threatened with death anyone found using the printing press. (…)

Nothing better illustrates this divergence than the fate of the observatory built in Istanbul in the 1570s for the renowned polymath Takiyüddīn al-Rāsid (Taqi al-Din). Born in Syria in 1521 and educated in Damascus and Cairo, Takiyüddīn was a gifted scientist, the author of numerous treatises on astronomy, mathematics and optics. He designed his own highly accurate astronomical clocks and even experimented with steam power. (…) In January 1580, barely five years after its completion, the Sultan ordered the demolition of Takiyüddīn’s observatory. There would not be another observatory in Istanbul until 1868.

By the way, Niall Magnusson, the character I created for the Ironsworn online campaign, was named after this author (and Magnus Haroldson).

Let me know if you liked any of these books!

I have also summarized the past year in the field of role-playing games.

I love travelling, history, literature and RPGs. I have a blog about my travels: https://castelviator.wordpress.com/ View all posts by Castelviator